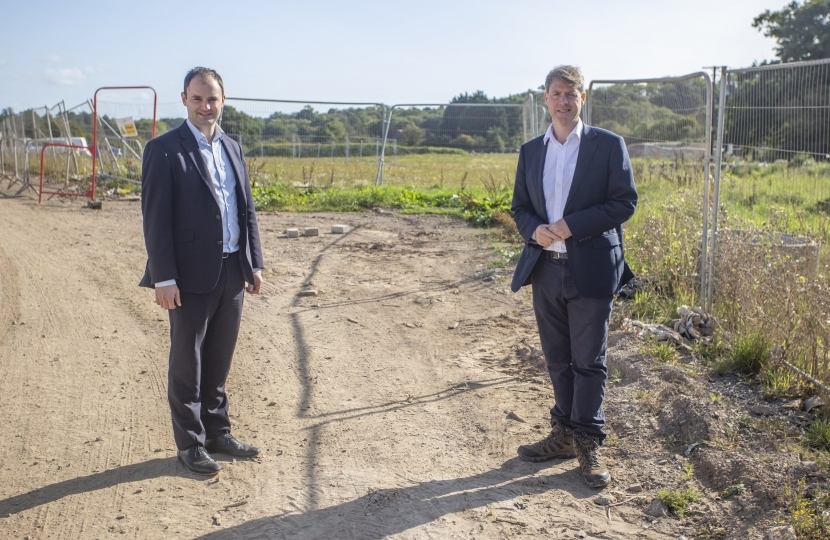 Local MP Chris Skidmore has welcomed the news that the campaign for a new secondary school in Lyde Green has succeeded, with vital funding having been secured from Government.

Plans for the secondary school have progressed in recent months, with both land and £7million in developer funding having been secured by the Council and an overwhelming local support on plans through public consultation, with planning permission set to be decided next month.

In order to fully fund the scheme, the Council had bid through Wave 14 of the Government’s Free Schools Programme, which was supported by local MPs Chris Skidmore and Luke Hall, who have campaigned persistently for the school vision to become a reality.

Chris has been pushing for the new 900-place secondary school for some time, working with the neighbouring MP and raising the issue directly with the Secretary of State Gavin Williamson, as well as securing a Parliamentary debate with Education Minister Nick Gibb, with both reacting in a positive way to the campaign.

The local MP has helped make the case for the new school to be built as a vital addition to the growing community of Lyde Green, raising the need for pupils currently educated locally to be able to move to a suitable secondary setting in September 2022, ensuring families can have access to appropriate education provision locally.

The push for secondary provision in the new and flourishing community follows a successful campaign in 2014 for the £5.7million funding to build Lyde Green Primary School, which was led by Chris and local representatives including current Emersons Green Cllrs Judy Adams, Rachael Hunt and Colin Hunt, the latter of whom has campaigned for a new secondary school for more than 20 years.

SGS Parkfield, as the school is expected to be named, is among 21 new free schools that will delivered as part of the Government’s free school programme, which has delivered hundreds of free schools since it launched in 2010.

Since the programme first launched, it has helped raise educational standards across England, with more than 80 per cent of free schools rated good or outstanding by Ofsted – meaning more children can benefit from learning in an excellent local school.

Kingswood MP Chris Skidmore said: “I am delighted that this vital bid has been approved and that our campaign to progress the secondary school plans for Lyde Green have been successful. I will be working with other local representatives and the Council in progressing the plans for the new £26million school and look forward to the doors opening up to a new generation of local pupils.”

“The rebuilding projects are just the start of our major ten-year programme, transforming hundreds of schools and improving the education of tens of thousands of children. Alongside this, over 15,500 children will now benefit from 21 new free schools across the country as we look to build back better after the pandemic.

“I am determined to get all children back into education as soon as possible, and will make sure we do not let the pandemic stand in the way of giving every young person the opportunity to succeed, progress and fulfil their potential”

In his letter about this announcement, the Secretary of State for Education also added: “Free schools are central to this Government’s plan to transform the education system, delivering greater choice, innovation and higher standards for parents and pupils. The programme has already provided thousands of good, new school places across the country and we are delighted to tell you that the free school application for SGS Parkfield has been approved.”

“The free schools programme has already successfully delivered greater choice, innovation and higher standards. We are confident that SGS Parkfield will help to do that for parents and pupils, in your constituency”