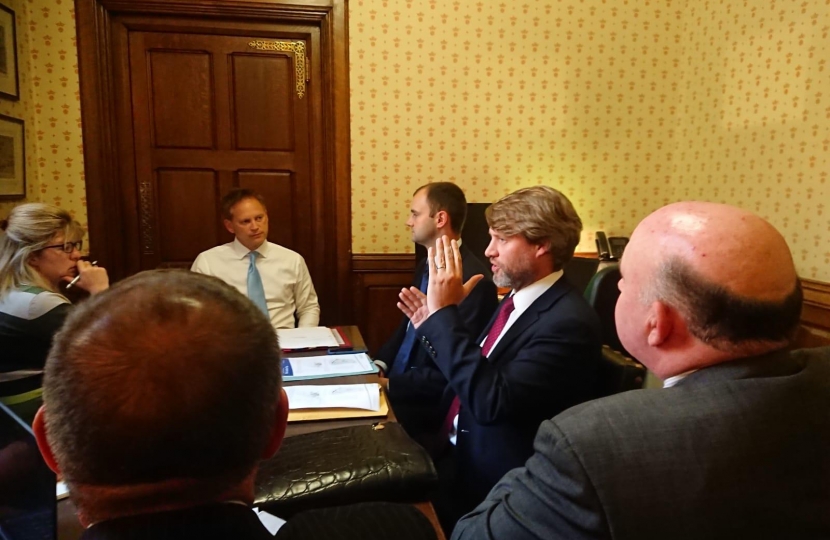 MP Chris Skidmore joined colleagues in lobbying the new Transport Secretary to support the campaign for the new M4 junction 18a at Emersons Green.

Working with his neighbouring South Gloucestershire MPs and West of England Mayor Tim Bowles, Chris recently organised a meeting with the new Transport Secretary Grant Shapps MP and Roads Minister Baroness Vere to lobby for funding to progress the next stage of technical work for the new motorway junction.

This work follows on from the initial funding Chris helped secure for a feasibility study, which eventually recommended the ‘western option’ for the new junction next to the Bristol and Bath Science Park. Chris had campaigned hard against the so-called ‘eastern option’, which would have carved through the Siston Green Belt.

The feasibility study also indicated various benefits of the new £428m junction, such as:

Chris said: “I have long-campaigned for a new motorway junction to keep our area moving and boost our local economy and helped secure the initial funding from the Treasury for the feasibility study.

I was pleased to again put the case for this vital project to the new Transport Secretary and Roads Minister with my fellow South Gloucestershire MPs and Mayor Bowles.

We received encouraging feedback from them on the benefits of the scheme and how the next stage of technical work can be progressed.

As the local MP, I pledge to continue this campaign so we can put in place the vital transport infrastructure we need to make it easier to get around our area.”

A £2million bid has recently been submitted to kick start the restoration of the site, which forms part of the wider regeneration of Kingswood, the High Street and the Town Centre, with plans for the current building to be fully restored and returned to use as a performance arts space.