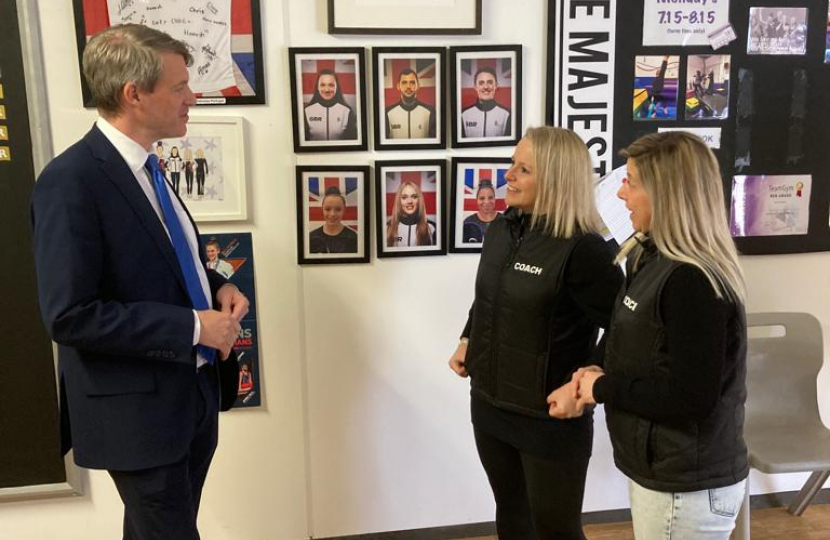 Located on the former Grange School site in Warmley, the existing sports hall is being refurbished and extended by South Gloucestershire Council to meet British Gymnastics’ and other sporting standards. Once complete next year, it will become the new home of Majestics Gymnastics, a popular local club serving local children and young people that is having to leave its existing home on the nearby Gallagher Retail Park in Longwell Green.

Local MP Chris Skidmore met club representatives when they were first faced with eviction and has been working with local councillors, South Gloucestershire Council and the club to help secure a permanent new home.

Structural repairs on the sports hall will improve the existing fabric of the building, replacing the roof and cladding, while improving the building’s insulation and heating.

The rest of the sports hall building is to be redeveloped to provide new amenities for its users. New changing rooms and toilet facilities are planned for the site, along with a new cafe. New multifunctional areas and administration offices would also be provided.

Kingswood MP Chris Skidmore said: “I have been pleased to meet with the leaders of Majestic Gymnastics and have been supportive of their efforts to find a permanent new home so the club can thrive into the future.

Coming off the back of a successful Commonwealth Games for British Gymnastics, I am delighted to see that building work has now started on a new home for Kingswood’s budding gymnasts and our next generation of Olympic and Commonwealth medal winners. I look forward to its completion next year.”

The sports hall forms part of a comprehensive £10million regeneration of the former Grange School site. Chris has previously been successful in lobbying government ministers for just over £2million of investment from the national Brownfield Land Release Fund.

A campaign to improve the recycling of soft plastics in South Gloucestershire has taken a major step forward following lobbying of the Recycling Minister by local MPs in Parliament.